Avulsion fractures of the pelvis are usually observed in skeletally immature patients, involved in sports. Sprint running and sudden accelerating and decelerating activities are the most common mechanism for these fractures. We present an adult patient diagnosed with avulsion fracture of the anterior inferior iliac spine, who experienced a nonunion after conservative treatment. The nonunion was treated surgically, 11 months after the fracture. The patient was not allowed to put any weight on the affected extremity and to extend the hip for the first two months. As of the third month, the patient started hip extension and weight bearing gradually with crutches. The patient was free of symptoms six months after the operation and radiographs showed complete healing of the fracture.

Avulsion fractures of the pelvis are usually observed in the skeletally immature population, particularly those who are involved in sports. Sprint running, sudden accelerating, and decelerating are the most common activities leading to avulsion fracture. This condition is more common in males than in females.[1] The occurrence mechanism of these fractures is sudden and strong contraction of the muscle attached to the apophysis.[2]

Avulsion fractures of the anterior inferior iliac spine (AIIS) are less frequent than other pelvic avulsions with an incidence of 14.8 to 22.1%, possibly related to earlier apophyseal closure than the others.[3] Anterior inferior iliac spine avulsion fractures occur due to the pull of rectus femoris muscle during forceful extension of the hip. These patients are presented with complaints of groin pain, pain during hip joint movements and limping. Avulsions may often go undiagnosed in the emergency setting, and patients may receive a conservative treatment with the diagnosis of soft tissue trauma. However, avulsion fractures of AIIS can be diagnosed with medical history and thorough investigation of radiographs.

Fractures of the AIIS is uncommon in adults and, as these fractures are more common in the skeletally immature, such fractures may go undiagnosed. In this article, we present an adult patient initially misdiagnosed as soft tissue trauma to the groin, and received conservative treatment. The patient was diagnosed with AIIS avulsion fracture nonunion at five months after the trauma and treated surgically.

A 23-year-old male patient had no known disease, history of surgery was admitted to the emergency room (ER) with complaints of pain in the right groin and limping that developed after kicking the ball during an amateur football match. He was diagnosed with soft tissue injury and received conservative treatment.

Five months after the injury, the patient was admitted to the outpatient clinic with complaints of pain during hip movements and difficulty running. Physical examination revealed limited range of motion of the right hip compared to the healthy side. Flexion and abduction were painful. In addition, adduction and internal rotation provoked pain, suggesting a femoroacetabular impingement. Anteroposterior pelvis radiograph (Figure 1) and the computed tomography scan (Figure 2) revealed that the patient had an avulsion type fracture in the right AIIS that was in the process of healing. Based on the assumption that the union of the fracture was delayed, it was decided to continue conservative treatment. 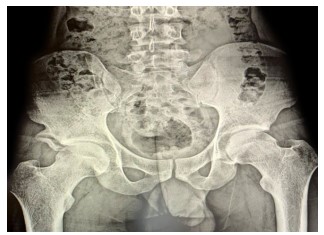 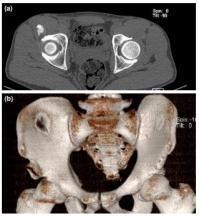 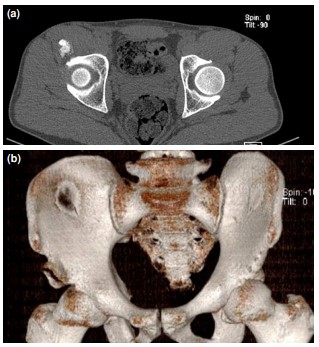 The patient was admitted to the outpatient clinic with similar complaints, 11 months after the trauma. Although the patient did not smoke, a nonunion was diagnosed (Figure 3). Surgical treatment for the nonunion was planned. A SmithPetersen was used to approach and expose the AIIS (Figure 4). The rectus femoris muscle was identified to be intact. Callus was removed and the fragment was mobilized. Following appropriate reduction of the fragment to the pelvis under fluoroscopy guidance fracture was fixed with two 4.5-mm cancellous screws after repositioning (Figure 5). The patient was not allowed to put any weight on the affected extremity and to extend the hip for the first two months. As of the third month, the patient started hip extension and weight bearing gradually with crutches. Six months after the operation, the patient was free of symptoms and radiographs showed complete healing of the fracture (Figure 6). 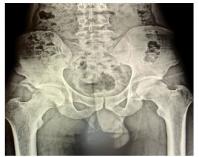 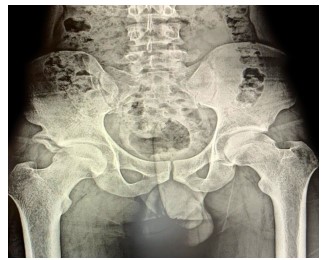 Figure 4. (a) Surgical incision (anterior approach) and (b) appearance of avulsion fracture with rectus femoris insertion.
× 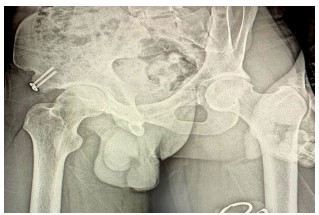 The radiological image of an AIIS avulsion fracture is usually in the shape of a crescent or a triangle. Fracture often appears minimally inferiorly displaced. Computed tomography and magnetic resonance imaging can also be used in diagnosis.

These injuries are usually treated conservatively and sufficient healing and early return to sports can be expected.[1,5] However, some authors recommend surgery based on the amount of displacement of the avulsed segment.[6] The most common complications in patients undergoing conservative treatment are formation of exocytosis, absence of union, and persistent pain.[7] Open reduction and internal fixation are usually indicated in cases with fragment displacement of more than 3 cm, nonunion and the need for short return to activity.[8] In addition, there are some studies showing that these cases are treated arthroscopically in the literature.[9,10]

Radiographs of the patient had osteoarthritis findings; however, the patient did never had a symptom before. Although not mentioned in the literature, early osteoarthritis and mixed type femoral acetabular impingement findings in both hips of the case we presented were though to predispose for AIIS avulsion fracture.

In conclusion, cases of AIIS fracture in skeletally mature patients are uncommon; therefore, they can be treated inadequately due to misdiagnosis. Although conservative treatment is typically the first option, nonunion may occur which necessitates a surgical intervention.