Forty-year radiological follow-up of a patient undergoing bilateral developmental dysplasia of the hip surgery: A joint with remodeling capacity

Children diagnosed with developmental dysplasia of the hip (DDH) are largely successfully treated with conservative treatment. With increasing age, associated deformities may become more complex and require increasingly aggressive treatments. A 42-year-old male patient was admitted with the complaint of pain in both hips. In his medical history, open reduction of her left hip was performed at the age of two due to DDH. Open reduction of the right hip was performed, when he was approximately 2.5 years old, and a shortening and derotation osteotomy of the right femur was performed two months later. Upon admission to our center, it was determined that the relationship between the acetabulum and femur was preserved in both hips and there was no dislocation in the 40-year follow-up radiograph. In conclusion, this case has, once again, shown that the remodeling capacity of the hip joint in childhood is high.

Developmental dysplasia of the hip (DDH) has a wide spectrum of deformities, from a mildly dysplastic hip to a severely dysplastic or fully dislocated hip.[1] There is still little information about the exact etiopathogenesis of DDH and many genetic, mechanical and environmental risk factors are effective in its development. Although the diagnosis of DDH is usually made at an early age, there may be cases diagnosed in adolescence or adulthood. In case of late diagnosis, the probability of complications increases exponentially in the long-term.[2]

Developmental dysplasia of the hip is one of the most important causes of secondary coxarthrosis in Turkey. It alters the biomechanics of the hip, causing cartilage overload, leading to early wear of the articular cartilage and the development of osteoarthritis (OA). It is estimated that 2.6 to 9.1% of total hip arthroplasty (THA) cases are due to OA secondary to DDH and is the main reason for THA surgery in young individuals (approximately 21 to 29%).[3] In pediatric DDH management, morbidity associated with this disease can be prevented to a large extent with early diagnosis and conservative treatment. Currently, hip ultrasonography scanning is performed for this purpose. Hip ultrasound is the gold-standard diagnostic, monitoring tool for DDH in neonates and infants less than six months old and has been adopted as a routine screening method for DDH.[4] Children diagnosed with DDH are largely successfully treated with conservative treatment. Surgical approaches are recommended, when conservative treatments fail. With increasing age, associated deformities may become more complex and require increasingly aggressive treatments such as open reduction and femoral or pelvic osteotomy.[5] In the years when ultrasonographic scanning was not known, the diagnosis of DDH was usually made after the walking age and it was attempted to be treated with surgery.

In this report, we discuss the 40-year follow-up results of a patient who underwent surgical treatment for DDH in the late 1970s.

A 42-year-old patient was referred to our clinic with the complaint of pain in both hips, which was prominent in the right hip. In his medical history, he was operated for DDH, when he was two years old. The patient who underwent open reduction of his left hip in December 1978 was hospitalized one month later (January 1979) for ipsilateral femoral derotation. However, as he had mumps, his surgery was postponed and a weight of 2 kg was tied and he was taken to skin traction and discharged home. In the later follow-ups, left femur shortening and derotation osteotomy was not performed, considering that the development of the hip was good. Postoperative radiographs of the left hip at six months and preoperative radiograph of the right hip (Figure 1, June 1979) showed dysplasia of the left acetabulum and dislocation of the right hip. 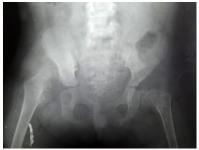 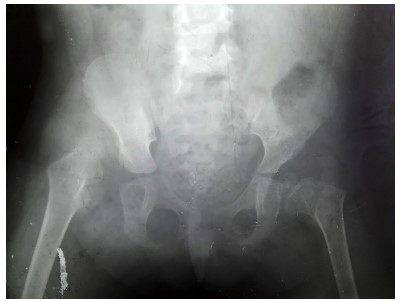 From the examination of the operation reports, it was learned that open reduction of the right hip was performed on June 13th, 1979, and right femur shortening and derotation osteotomy was performed two months later (August 1979). In the early postoperative follow-up X-ray, the osteotomy line was fused; however, both acetabulum dysplasias, prominent on the right, continued. Acetabular index measured approximately 44 degrees in the right hip and 30 degrees in the left hip (Figure 2). 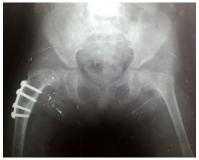 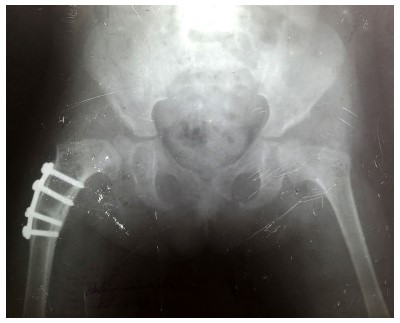 On the radiograph four years after the operation (January 6th, 1983, Figure 3), the development of both hips was good, concentric reduction was achieved and the acetabular index was approximately 22 degrees in both hips. The patient was admitted to our hospital in October 2019 with the complaint of increasing pain in both hips for four years. During examination, the movements of both hips, particularly on the right, were limited and painful. In the 40-year follow-up radiograph (October 1st, 2019, Figure 4), concentric reduction was achieved in both hips, but arthrosis developed in both hips, prominently on the right.

Figure 3. An anteroposterior pelvis radiograph taken on January 6th, 1983. Concentric reduction was achieved in both hips and both acetabula appear to be remodeled. Acetabular index on both hips is approximately 22 degrees.
× 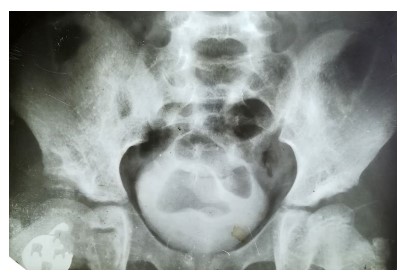 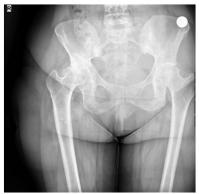 Figure 4. Concentric reduction is achieved in both hips, but arthrosis is seen in both hips, more prominently in the right hip.
× 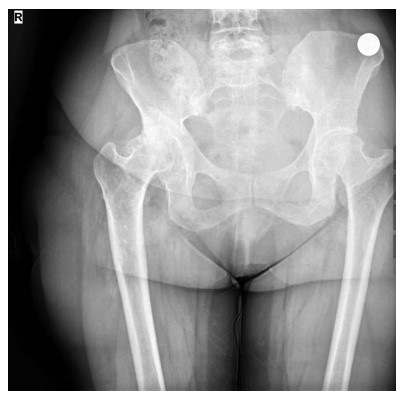 The main goal of DDH treatment is to achieve and maintain concentric reduction of the hip joint. While the chance of achieving this goal is high with conservative treatment in children diagnosed before six months of age, surgery becomes inevitable to achieve concentric reduction in children diagnosed after walking age. In the surgical treatment of DDH, osteotomies are performed for the femur and pelvis, except for open reduction, and it is known that there is no standard surgical method accepted by all centers.[6]

Femoral osteotomies are designed to reorient the femoral head by increasing derotation and varus to stimulate and stabilize acetabular development.[7] In the case we presented, open reduction on the left side, open reduction on the right side, and then femoral osteotomy were performed in separate sessions. Bilateral acetabulum dysplasia continued, with acetabulum dysplasia prominent on the right in the early periods following the surgery. In the literature, it is recommended to perform acetabular and/or femoral osteotomies in cases with persistent acetabular dysplasia to prevent or minimize the risk of coxarthrosis.[3] Salter is of the opinion that open reduction and periacetabular osteotomy should be performed simultaneously with all treated hips in patients 18 months of age or older.[8] On the contrary, there are studies that argue that early and routine pelvic osteotomy to correct acetabular dysplasia may be unnecessary in many children.[9,10]

The potential for remodeling of the acetabulum decreases with age and, currently, it would be usually accepted that Salter or another periacetabular osteotomy should be performed, particularly for the right acetabulum of this case. However, the indications and timing of these procedures are still a matter of debate. In this case, particularly the right acetabulum with significant dysplasia was observed to have developed and remodeled very well within four years. On 40-year follow-up radiograph, the acetabulum and femur relationship was preserved in both hips and there was no dislocation.

In conclusion, this case has, once again, shown that it should be kept in mind that the hip joint in childhood is a developing joint with remodeling capacity. If acetabulum dysplasia is detected in a hip with concentric reduction between the femoral head and acetabulum, it would be an appropriate approach not to consider surgery immediately and to allow time for acetabulum remodeling. In addition, it is necessary to consider the possibility that femoral osteotomies may be an important treatment option for maintaining the relationship between the acetabulum and the femoral head and maintaining the reduction.