Heterotopic ossification may occur due to forcible physical therapy

In this article, heterotopic ossification (HO) that developed during the rehabilitation of a 13-year-old male patient who had undergone surgical treatment for a radial head fracture is discussed. In our case, while the operation and the postoperative period were uneventful, the pain of the patient increased during the rehabilitation, and the limitation of motion in the elbow did not improve. In addition, signs of ulnar nerve compression developed. Heterotopic ossification areas containing the periosteum in the supracondylar region were observed on the elbow radiograph. In experimental animal studies, the HO model is induced by performing strenuous exercises in the period following immobilization. We wanted to emphasize that the process of HO development in our case is similar to the development of HO in the experimental model and that strenuous exercises may cause HO development in fracture rehabilitation.

Heterotopic ossification (HO) is a condition in which bones form in the muscle and soft tissues where normally bones should not exist. The etiology of this disease, which was described about 100 years ago, has not been fully revealed despite the time elapsed.[1,2] Heterotopic ossification is generally studied in three groups: neurogenic HO, traumatic HO, and myositis ossificans progressiva.[1] Neurogenic HO mostly accompanies head and spine injuries and some neurological diseases. Traumatic HO occurs after surgical interventions and trauma. Myositis ossificans progressiva is a disease with an autosomal dominant inheritance that involves muscles, ligaments, and tendons, and it can be mortal.[2]

Heterotopic ossification may develop (usually asymptomatic) after orthopedic surgeries, and this type of HO is coincidentally discovered in the X-rays taken for other purposes. Heterotopic ossification is seen in about 20% of the patients who undergo surgical treatment due to elbow fracture, and generally, they do not cause complaints in patients.[3]

In the present study, a patient who underwent surgical treatment after isolated displaced radial head fracture and developed symptomatic HO in the postoperative rehabilitation process will be discussed.

A 13-year-old male patient presented to the emergency room after left elbow trauma. In the elbow X-ray taken after the examination, a radial head fracture was detected (Figure 1). A closed fracture reduction maneuver was not applied to the patient in the emergency department. In the 24th hour following the trauma, surgical treatment was applied to the fracture under tourniquet (70 min), and the fracture was fixed with two Kirschner wires (K-wires). There was no complication related to the surgery. In the X-ray taken after four weeks of immobilization, fracture union was considered sufficient, and the K-wires were removed (Figure 2). In his examination, passive elbow flexion was between 30 and 90 degrees, and the joint was painful towards the end of the range of motion. 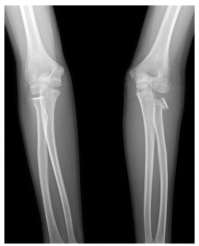 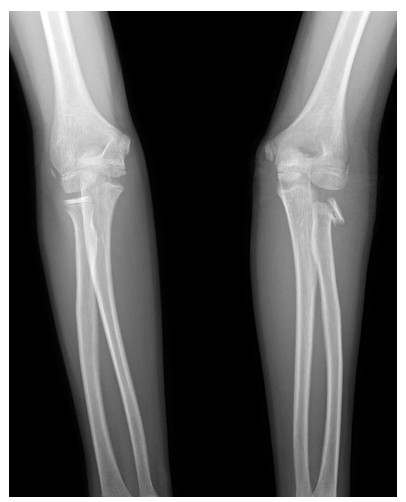 Figure 2. Sufficient union observed in the X-ray taken in the fourth week following the surgery.
× 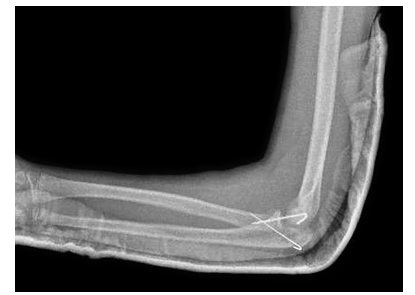 The patient was taken under a rehabilitation program and had complaints of pain and swelling in his elbow and numbness in the fifth finger of his hand in the follow-up visit at the first month of his rehabilitation (postoperative second month). He described that his pain started increasing beginning from the first week of the rehabilitation and that there was no improvement in the joint range of motion. The patient expressed that extreme force was applied in the rehabilitation to enhance the range of motion. Hypoesthesia was detected in the region corresponding to the ulnar nerve area. Areas of HO were detected in the left elbow supracondylar region in the X-ray (Figure 3). In the laboratory tests conducted during this period, infection parameters were normal. In the electromyography (EMG), a decrease was detected in the ulnar nerve motor conduction velocity at the level above the elbow. In the three-phase bone scintigraphy, immature HO was detected in the anterior surface of the elbow joint at the level above the elbow. In the magnetic resonance imaging performed for the elbow region, HO areas were observed in the area above the elbow. Indomethacin 3x25 mg treatment was started for the patient, and a passive rehabilitation process instead of an active forcible manipulation process was initiated. Drug treatment was continued for a month. The treatment was terminated as a result of an apparent improvement in the complaints of the patient. A decrease in HO was detected in the 12th-week X-rays of the patient. 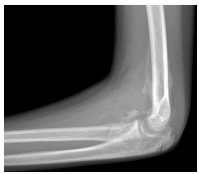 Figure 3. Ossification areas detected in the humerus supracondylar region and in the anterior part of the capsule in the X-ray taken in the first month after the start of rehabilitation (postoperative second month).
× 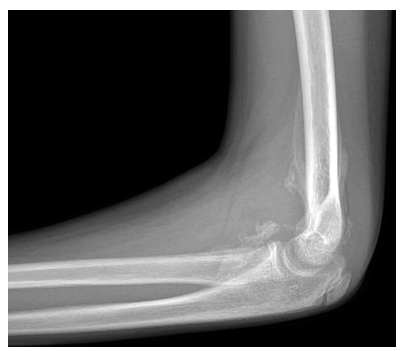 In the X-ray taken in the ninth month after the surgery, HO had completely healed and the range of motion of the joint was normal (Figure 4). The patient's legal representatives were informed that data from the case would be submitted for publication, and the patient gave their consent. 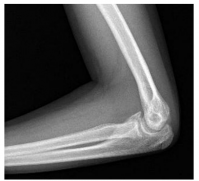 Figure 4. Areas of heterotopic ossification observed to have completely disappeared in the X-ray taken in the ninth month after the surgery.
× 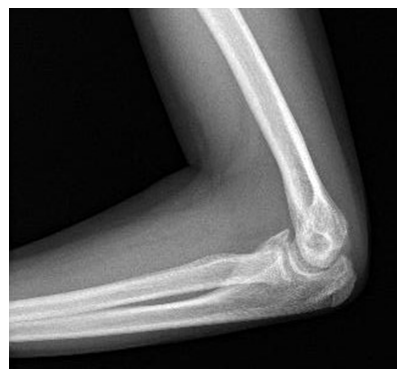 The etiology of HO, the ossification of the muscle and soft tissues, is not fully understood. Mesenchymal stem cells with osteogenic potential are influential in the development of the disease. Some articles suggest that passive range of motion exercises can accelerate HO following trauma.[4,5] Although there are no clinical studies directly associating HO to exercises, some historical data from textbooks and review studies state that, particularly in burn patients, passive ROM exercises may further accelerate HO development.[6]

Osteomyelitis and septic arthritis should be considered in the differential diagnosis of HO. Since the acute phase reactants in our patient were within normal levels, we did not consider infection.

In the orthopedic surgeries performed for Paget’s disease, ankylosing spondylitis, posttraumatic arthritis, there is a risk for HO development.[7] In such situations, the activity of mesenchymal stem cells may be suppressed with the prophylactic radiotherapy performed in the early stage of the surgery, and thus, the development of HO may be prevented. In our case, prophylactic radiotherapy was not administered after the surgery as the patient was not considered to have risk factors.

Entrapment neuropathies may be observed due to the compression effect of the ossification in soft tissues. Similarly, in our case, hypoesthesia was detected in the ulnar nerve area in the examination following a complaint of numbness in the fifth finger, and the patient was diagnosed with ulnar nerve neuropathy with EMG. Following the anti-inflammatory treatment, the numbness complaint of the patient recovered completely in the second month.

Michelsson et al.[8] displayed that HO developed in the quadriceps muscle due to forcible manipulation applied after the immobilization of the knee joint in rabbits. This model has also been used in other studies to develop experimental HO in animals.[9,10] Although the mechanism of HO development cannot be fully explained in this model, the periosteum and the muscle are considered to be affected simultaneously and ossification is not only in the muscle tissue but also associated with the periosteum.[10] It is remarkable that the HO areas detected in our case were also related to the periosteum and were not only in the muscle tissue. By also taking into account its development time, this ossification that occurred in the supracondylar region of the humerus, which was different from the surgical site, was considered to be an atypical process that developed due to rehabilitation with forcible manipulation.

In the literature, we could not find a HO case due to physical therapy and rehabilitation with forcible manipulation. A unique treatment protocol was prepared for our patient for such a rare occurrence. Preservation of the joint range of motion, drug treatment (anti-inflammatory drugs, bisphosphonates), radiotherapy, and surgical excision are among the treatment options of the HO. Surgical resection in HO can be performed after the maturation of the ossification is complete, which takes about 12 to 18 months.[1] In our case, the patient has completely recovered without the need for surgical treatment. Bisphosphonates are effective in HO treatment by inhibiting bone mineralization. However, since the age of our patient was not appropriate for bisphosphonate treatment, this treatment method was not preferred. Indomethacin treatment used for our patient manifests its effect by preventing the mesenchymal cells from transforming into osteogenic cells that produce bones.[1]

In conclusion, it must be kept in mind that forcible exercises in the period following compulsory immobilization in the treatment of fractures could cause trauma in the muscle just as it does in the experimental animal models and trigger HO development. It is difficult to find the balance between a limited range of motion due to lack of exercise and a limited range of motion due to HO development. In case of clinical suspicion, direct radiography examinations should be performed.