Melorheostosis on the second finger of the hand

Melorheostosis is a rare disease with skeletal system involvement. The etiology of the disease, which usually manifests itself with bending and pain in the long bones, is still unknown. We present a 20-year-old male patient admitted to our outpatient clinic with complaints of deformity and pain in the second finger of the hand that had become more evident in the last several years. Intense sclerosing and cortical thickening were observed radiologically in the second phalanges and metacarpal. Deformities in radiological evaluation, ‘flowing candle wax’ image in the medulla, and further laboratory examinations enabled us to diagnose the patient with a rare disease, melorheostosis. The patient, who was treated conservatively, has been attending his follow-up examinations regularly for the last three years and is still being followed up conservatively. In this case, we presented a case of this rare disease, which is the rarest hand involvement, in detail.

Melorheostosis is a rare bone disease with its etiology still unclear. Le’ri and Joanny[1] defined melorheostosis as a rare, congenital, non-hereditary disease of unknown etiology first in 1922. In Greek, this name describes the image of the melting or flowing candle in the bone.

The disease onset is often in childhood, adolescence, and rarely at birth.[1] It can be diagnosed at any age, and it is seen equally in both sexes.[2] About half of the cases present signs and symptoms by the age of 20.[1] While the disease's progression is fast during growth, it slows down when growth stops. Linear hyperostosis of the cortex is the enlargement of the medullary canal and periosteum, which resembles a typical ’melting wax’ appearance of the affected bone. Hyperostosis is often accompanied by hyperplasia and abnormalities in adjacent connective tissues.[2] This disease may result in growth disturbance in the extremity, joint ankylosis, restricted movement deformity, and contracture as a result of the effects on bone and soft tissue.[2]

This case report aimed to present a detailed examination of a rare bone disease in an atypical localization in the upper extremity.

A 20-year-old male patient was admitted to the orthopedics and traumatology outpatient clinic with a second finger sprain and minimal pain in his left hand. On the inspection, it was determined that the second finger of the hand was bent slightly to the ulna, and there was no redness and increase of temperature. No restrictions were detected in the range of motion of the finger. The patient described a gradual bending in this finger over the past two to three years. Anterior-posterior and lateral hand radiographs revealed thickening of the cortex in all phalanges of the second finger and metacarpal head, hyperostosis, and increased opacity in the medulla (Figure 1). A clear diagnosis was not considered on these radiological images. The patient was further examined with computed tomography (CT) (Figure 2) and magnetic resonance imaging (MRI), and biochemical bone turnover markers were studied. In laboratory findings, calcium, phosphorus, C-reactive protein, sedimentation rate, alkaline phosphatase, alpha-fetoprotein, and bone-specific alkaline phosphatase were within normal limits.

Figure 1. Clinical appearance of the (a) second finger and (b) anterior-posterior, (c) lateral radiographs.
× 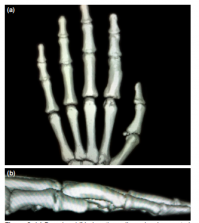 Figure 2. (a) Dorsal and (b) ulnar three-dimensional computed tomography images from initial presentation.
× 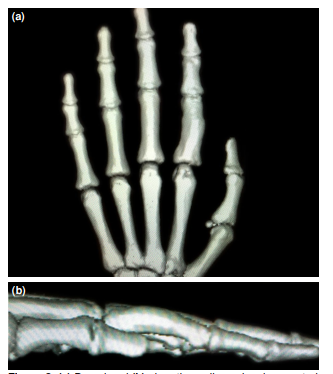 In the MRI, T1 and T2 sequences showed an increase in hypodense sclerosis in the second finger and metacarpal head, and bone marrow edema in the entire finger was noteworthy. No pathological signal changes were detected in the soft tissue. When CT, MRI, and direct radiography were evaluated together, the diagnosis of melorheostosis with the 'flowing candle wax' appearance was considered in the foreground. As the patient had tolerable pain, no treatment apart from non-steroidal anti-inflammatory drugs (NSAIDs) was initiated.

The patient attended his follow-up examinations, and in his last follow-up at three years, symptoms of pain and deformity were still similar compared to when the patient first applied (Figure 3). The patient was informed that the data regarding the case would be submitted for publication, and his consent was obtained. 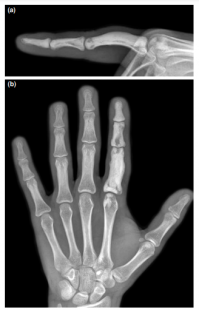 Figure 3. (a) Anterior-posterior and (b) lateral radiograph three years after the diagnosis.
× 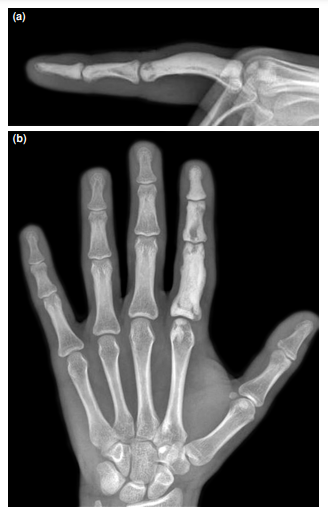 There are some theories about the etiology of melorheostosis, such as embryogenic metameric disorder, neural infection, vascular disorder, gene disorder, and fibroblast growth factor defect.[3] Mesodermal abnormalities such as hemangioma, nevus, and arteriovenous malformation and glomus tumor have been reported in cases with melorheostosis.[4] While it is often localized in long bones, it is rarely seen in the hand. Among 400 published cases, hand cases appear to be limited to 10. Other rare regions are the jaw, foot, and axial skeleton system.[3,4]

The diagnosis was the most challenging aspect in this case. As we were not familiar with the initial radiographic findings, we had to exclude other conditions with a meticulous radiographic investigation and biochemical analysis. Radiology is generally sufficient in the diagnosis of melorheostosis. In radiology, there is longitudinal hyperostosis and a flowing candle image in the medulla in the relevant bone.[1] In some cases, lymphedema, hemangioma, soft tissue mass, myositis, muscular dystrophy, arteriovenous aneurysm, and scleroderma can be seen.[2] The differential diagnosis of melorheostosis includes scleroderma, infantile cortical hyperostosis, osteopathia striata, osteopoikilosis, and neurofibromatosis. Radiological findings in melorheostosis are usually sufficient for an accurate diagnosis.[5]

There are five radiological presentations in melorheostosis: (i) osteoma-like (30%); (ii) classic ‘flowing candle wax’ (22%); (iii) osteopathia striata-like (26%); (iv) mixed (18%); and (v) myositis ossificans-like (4%).[3] The classic 'flowing candle wax' appearance was present in our patient's humerus; this should have allowed for the identification of melorheostosis, preventing two unnecessary bone biopsies.[6]

In this rare disease, some patients are completely asymptomatic, while others manifest different rates of pain and limitation of movement in the limb. In some severe cases, shortness in the affected limb and even severe contractures in soft tissue can be seen.[4] In these cases, the rate of hyperostosis increased in radiology, but there was no change in serum values.

There are sporadic cases published with this diagnosis involving the hand.[3] The most common symptom in this pathology is pain.[3] There are many theories about the cause of pain, but the exact cause is unclear. Pain can be relieved with NSAIDs and other analgesic drugs. Surgical procedures such as soft tissue relaxation, hyperostosis excision, capsulectomy, and extremity lengthening are indicated in carefully selected patients.[4] Some patients may have severe pain that requires sympathectomy or even amputation.[7]

Other findings are restriction of joint movement, numbness, and a growing desmoid mass appearance. Rarely, it can even lead to carpal tunnel findings due to strain in soft tissue. This pathology is seldom in the form of bone protrusion and can come with signs of irritation in the surrounding soft tissue.[6]

In cases similar to our case, malignant transformation was not observed in the follow-up and treatment.[4] However, the reason for frequent followup in these cases is to monitor whether the deformity or irritation requires any surgical treatment. In our case, this was not required in the three-year followup. There is no difference between a single extremity involvement and more than one involvement in terms of treatment management. The symptoms and deformity degrees of the relevant extremity are the most important guides in the follow-up.

The majority of melorheostosis cases are managed nonoperatively. Various surgical procedures such as tendon lengthening, debulking of osteotic bone, and osteotomies may be helpful in treating patients who have limb contractures or digit/limb shortening.[4] If the deformities progress, corrective surgery is performed after the growth is completed. In pediatric cases, surgery is not performed before the development is completed because early recurrence is common.[10] Treatment should vary depending on the patient's expectations and age.

In conclusion, melorheostosis is a very rare disease in the skeletal system, especially in the hand. In this disease, deformities and radiology are very helpful in diagnosis.