No studies have previously described the risk of Achilles tendon rupture in pregnant patients who have a history of Achilles tendinopathies. Many metabolic and structural changes occur in the synovia, tendon, and ligament structures due to the hormonal changes in pregnancy.[5] The current case is unusual as the patient does not have a history of corticosteroid or fluoroquinolone use. In this study, we presented a case of chronic Achilles tendinosis that developed spontaneous rupture during the third trimester of pregnancy.

A 28-year-old female patient in her 33rd gestational week with no history of smoking and a body mass index of 29.5 presented to our emergency service. The patient suffered from sudden pain in both calves while walking and subsequently fell. She expressed that she was not able to walk properly afterward. Further history taking revealed that the patient had complaints related to Achilles tendinosis for the last five years. She was treated conservatively with nonsteroidal anti-inflammatory drugs and enrolled in a rehabilitation program. There was no history of corticosteroid injection or ciprofloxacin use.

Initial physical examination revealed a 2 to 3 cm gap on both Achilles tendons and weakness in plantar flexion of both sides. Tenderness was observed over both Achilles tendons. Ecchymosis was detected behind both ankles (Figure 1). Thompson test was positive on the right side. Bilateral Achilles tendon rupture was discovered in the ultrasound, which was performed in the emergency department (Figure 2). With clinical and radiological data, the patient was diagnosed with bilateral Achilles tendon rupture. Magnetic resonance imaging showed total rupture on the right side, and the left side injury was confirmed with ultrasound only (Figure 3). 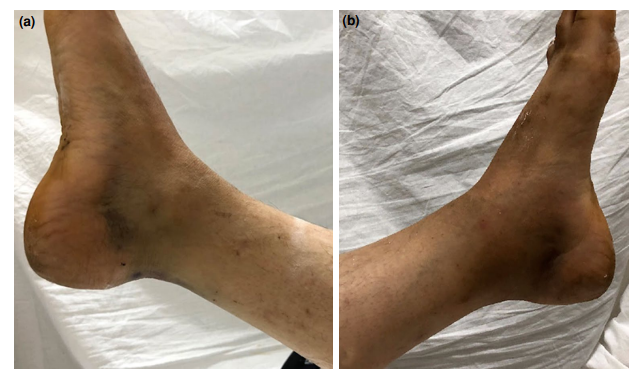 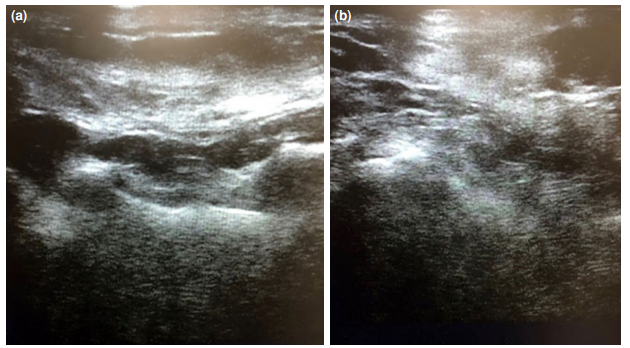 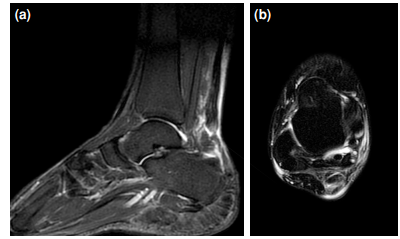 Considering the patient was in her third trimester and there was a risk of spontaneous abortion, we decided to manage both injuries conservatively. The patient was offered orthosis and physical therapy exercises for both lower limbs, with the ankle in the plantar flexion position (Figure 4). The patient was followed up weekly in the outpatient clinic for eight weeks and mobilized with orthoses.

Figure 4. (a) Front and (b) right side images demonstrating orthosis in the equinus position.
× 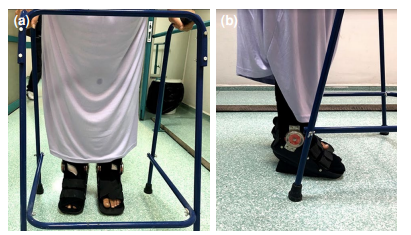 At the eight-week follow-up, there was no weakness in plantar flexion on the left side, and control ultrasound revealed a fully healed Achilles tendon. In the same visit, the right Achilles tendon had not recovered with conservative treatment, and surgical treatment was planned for when the pregnancy ended at the 10-week follow-up. The Achilles tendon would be short with a primary repair; therefore, we decided to repair it with the Bosworth technique.[6] A 1.5 to 2 cm wide strip was cut free from the middle part of the tendon. During surgery, macroscopic properties such as loosely organized and softened fibrils among fibrotic tissues resembled chronic tendinopathy (Figure 5). 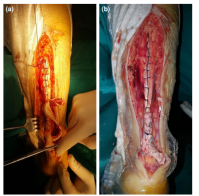 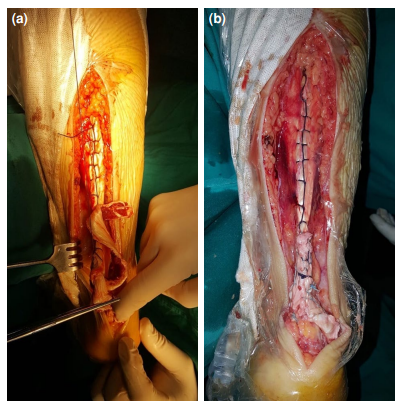 After the operation, a circular cast was applied at 20° plantar flexion. In the fourth week, a functional brace was applied and mobilized with a tolerable weight. The patient was mobilized with a full load at six weeks. The surgical wound was observed to be complicated by necrosis and dehiscence in the follow-up; accordingly, we applied a reverse sural flap to cover the Achilles tendon. The patient returned to her regular daily activity in the sixth month following the operation. In the 12th month, she received an Achilles tendon total rupture score of 90 for each foot. In the 24-month follow-up, the patient was mobilized without support. Written informed consent was obtained from the patient for the publication of this case report and any accompanying images.

Long-term corticosteroid, fluoroquinolone, or anabolic steroid usage as well as rheumatologic diseases are other identified predisposing factors for spontaneous Achilles tendon rupture.[4,7] Metabolic and structural changes occur in synovial tendon and ligament structures due to hormonal changes during pregnancy.[5] Therefore, tendinopathies such as carpal tunnel syndrome and de Quervain’s tenosynovitis are frequently observed in pregnant women. As one of the many hormonal changes that occur during pregnancy, increased relaxin hormone levels produced in the placenta and corpus luteum play a role in the change of tendon structure in pregnancy through the regenerative effects of this hormone on collagen structure.[8] In the animal study conducted by Hart et al.,[9] they reported that responsiveness of Achilles tissue in the rabbit model differs in sexes and is influenced by pregnancy and associated factors. In addition, prolactin, another hormone whose plasma levels increase during pregnancy, may stimulate fibroblast-like cells to produce proinflammatory cytokines and matrix metalloproteinase, leading to paracrine stimulation of synovial cells and exacerbation of connective tissue diseases as a result of this pathway. Although many physiological changes during pregnancy have been identified, clear pathogenesis predisposing the Achilles tendon rupture has not been identified. Alternatively, some authors report contrary results.[10] Our patient has been diagnosed with Achilles tendinopathy, which may contribute as a risk factor besides pregnancy. Pregnant women gain weight through pregnancy, and the maximum weight is achieved in the third trimester. Maximum pregnancy weight may be another contributing factor. Further comprehensive studies are needed to find the exact effect of pregnancy on Achilles tendon rupture.

In conclusion, patients with tendinopathy who go on to be pregnant should be counseled regarding the increased risk of rupture, and targeted preventative management may be beneficial. Physical therapy applications in appropriate cases should be considered before and during pregnancy to strengthen the Achilles tendon. Management is challenging once rupture occurs, and the patient and clinician must be aware of the risks that surgical and nonsurgical management options carry.