Anatomical reduction of both the fracture and the syndesmosis is essential to achieve a satisfactory functional outcome in ankle fractures.[1] Stabilization of the syndesmosis is a contentious topic that can be accomplished through a variety of methods and evaluated radiologically.[2] Syndesmotic malreduction occurs when anatomical reduction of syndesmosis is not achieved for a variety of reasons, including an inability to insert the screws in the proper position, failure to reduce the fracture in the anatomical position, and penetration of the deltoid ligament into the medial joint space.[3]

A 36-year-old male patient presented to our clinic in August 2020 with an ankle fracture-dislocation after pronation-external rotation injury. Anteroposterior (AP) radiograph of the ankle revealed a Weber type C fracture of the distal fibula and ankle dislocation (Figure 1a). He had no additional injuries or chronic diseases. He was a teacher. The ankle fracture-dislocation was initially closed reduced in the emergency department under sedation, a short leg splint was applied, and ankle AP radiographs were taken after reduction. Post-reduction AP radiography revealed Weber type C lateral malleolar fracture and syndesmotic separation (Figure 1b). Post-reduction computed tomography (CT) revealed an opening in the medial clear space due to a deep deltoid ligament avulsion (Figure 1c). 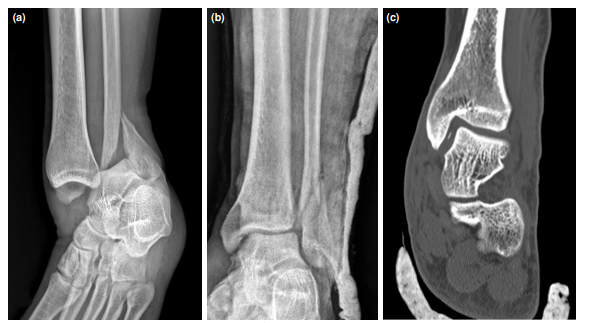 Surgical treatment was recommended for the injury. General anesthesia and a thigh tourniquet were applied to the patient. The distal fibula fracture was anatomically reduced with two lag screws and a neutralization plate, and the length of the fibula was restored. Before syndesmotic stabilization, medial exploration was performed to confirm that the deltoid ligament did not hinder the reduction. The deep deltoid ligament that entered the medial joint space was excised, and no extra soft tissue was seen in the medial joint space. After that, for syndesmotic stabilization, two 3.5 mm 3-cortex full-threaded cortical screws were placed parallel to the ankle joint from posterolateral to anteromedial. The operation was terminated, assuming that the syndesmotic reduction was achieved under fluoroscopy control.

However, syndesmotic malreduction was suspected when the tibia-fibular overlapping was 2 mm on postoperative radiographs taken the next day (Figure 2a). A CT scan of the operated ankle was obtained. As demonstrated in CT axial sections, the lag screw head entered the incisura fibularis and prevented syndesmotic reduction (Figure 2b). 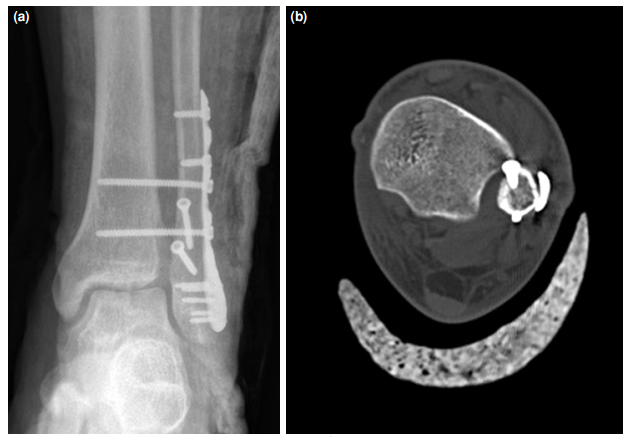 The patient was reoperated as the screw had blocked the anatomical reduction of the syndesmosis. General anesthesia and a thigh tourniquet were applied to the patient. The syndesmosis screws were then removed, and the lag screw entering the incisura fibularis was removed. A 3.5 mm 3-cortex full-threaded cortical screw was placed parallel to the ankle joint from posterolateral to anteromedial for syndesmotic stability. The surgery was terminated after it was confirmed that syndesmotic reduction had been achieved under fluoroscopy control (Figure 3a). After the operation, the reduction was demonstrated with axial CT sections (Figure 3b). The patient's weight bearing was limited for six weeks, after which the syndesmosis screw was removed (Figure 4). The patient returned to normal activities four months following the operation. At the one-year follow-up assessment in August 2021, there was no restriction in ankle range of motion. The patient was informed that data from the case would be submitted for publication and gave their consent. 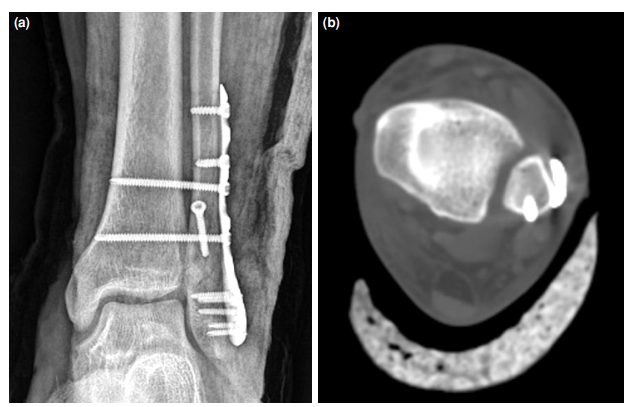 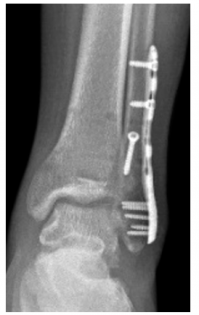 Figure 4. Anteroposterior radiograph of the ankle following removal of the syndesmosis screw.
× 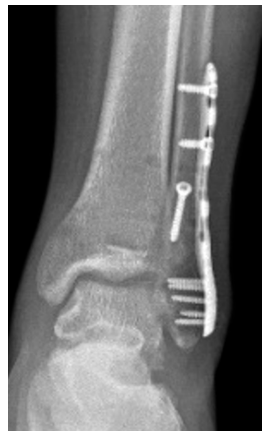 In the literature, deep deltoid ligament entering the medial joint area, malreduction of the distal fibula and posterior malleolus, incorrect positioning of the syndesmosis reduction screw, and excessive compression have been reported among the causes of syndesmotic malreduction.[9] In long-term follow-ups of ankle fractures with syndesmosis injury, it has been observed that postoperative syndesmotic malreduction results in poor functional outcomes.[10] In our case, we discovered that the lag screw's head entered the incisura fibularis, resulting in malreduction. This demonstrates the importance of attention in treating lateral malleolar fractures utilizing lag screw osteosynthesis.

In conclusion, incorrect lag screw location is a surprising and previously unknown phenomenon in syndesmotic malreduction. The anatomical position of the fibula deteriorates following syndesmosis injury, and if the lag screw is inserted from the anteromedial aspect of the fibula, the head of the lag screw becomes lodged after syndesmosis reduction. This case demonstrates how lag screw misalignment can result in syndesmotic malreduction, and it is hoped that this article increases awareness on the subject.