A rare disease of the pediatric pelvis: Van Neck-Odelberg disease

Ischiopubic region of pelvis is formed from two centers, the superomedial pubic center and the posterolateral ischial center. There is a strip of cartilage tissue between these two centers, called ischiopubic synchondrosis (IPS). Van Neck-Odelberg disease (VNOD) is a benign skeletal overgrowth of IPS. Two patients, a 10-year-old girl and a seven-year-old girl, were admitted to the outpatient clinic for left groin pain and limping. After physical examination and radiological evaluation, the patients were diagnosed with VNOD. Treatment with non-steroidal anti-inflammatory drug and activity restriction for three weeks was applied. No pain or limping was observed at one month of follow-up. In conclusion, non-specific groin pain and limping can be caused by VNOD. Trauma, post-traumatic osteolysis, stress fracture, osteomyelitis, and neoplasms are other pathologies that should be considered in the differential diagnosis.

Ischiopubic synchondrosis (IPS) is a hyaline cartilaginous joint between the ischial ramus and inferior pubic ramus. It is a temporary joint and is ossified before adolescence.[1] During the ossification period, enlargement of the ramal ends may cause a tumor-like appearance on radiographs.[2] Although this period is asymptomatic in many cases, tumor, osteomyelitis, stress fracture and osteochondrosis may be considered in the differential diagnosis of patients presenting with groin pain and limping.

Odelberg[3] and Van Neck[4] in 1923 and 1924, respectively, reported an enlargement of IPS in symptomatic cases. Consequently, after both authors described the symptoms accompanying the radiological appearance in IPS, similar cases were reported in the literature and, therefore, this clinic entity was called Van Neck-Odelberg disease (VNOD).

In this case report, we present the diagnostic process and treatment of two cases with groin pain and limping symptoms who were later diagnosed with VNOD.

Sclerotic shadow and enlargement were detected in the left IPS without periosteal reaction on the anteroposterior (AP) pelvis radiograph (Figure 1). Computed tomography (CT) images revealed a lytic area and enlargement of left IPS (Figures 2 and 3) Magnetic resonance imaging (MRI) revealed a transverse hypointense fibrous band surrounded with edema in the region of the left IPS, as evidenced by the hyperintense signal on axial T2-weighted images (Figure 4). 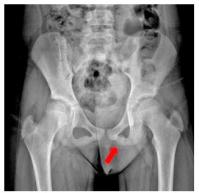 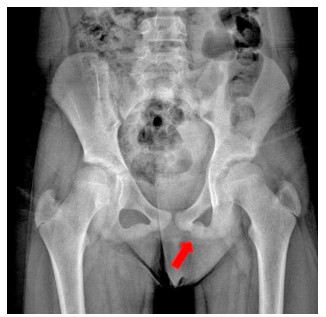 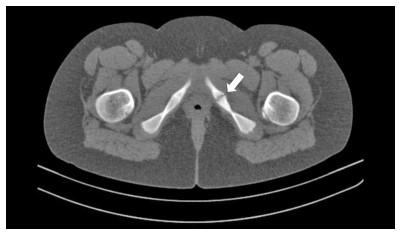 Figure 4. A transverse hypointense fibrous band surrounded with edema in the region of left ischiopubic synchondrosis as evidenced by the hyperintense signal on T2-weighted magnetic resonance imaging scans (green arrow).
× 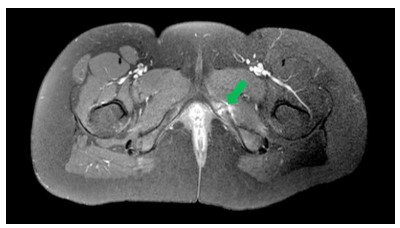 Treatment with non-steroidal anti-inflammatory drug (NSAID) and three-week activity restriction was recommended. There were no symptoms at 1, 6, and 12 months of follow-up. A written informed consent was obtained from the parents of the patients for the publication of this case report.

Case 2- A seven-year-old, right dominant girl was consulted by the pediatric rheumatology department. At the initial evaluation, she had a persistent left groin pain and limping. Her medical history revealed that the patient was admitted for several times for occasional hip pain within the past year. The patient had no history of trauma and there was no fever, swelling or local warmth. However, there was tenderness with deep palpation in the left groin area and range of motion of the left hip was painful and restricted. Her BMI was 14.8 kg/m2. The WBC, ASO, ESR, and CRP values were within normal limits. The RF, ANA, and HLA-B27 were negative. 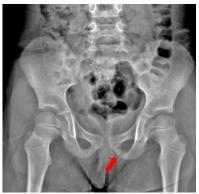 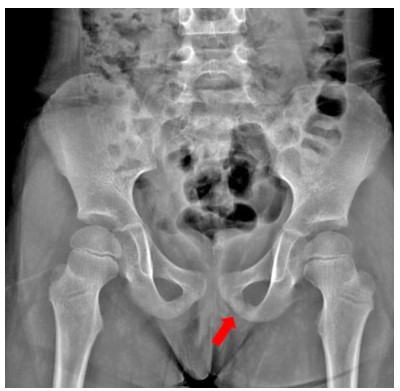 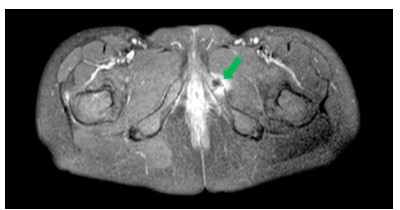 The patient was diagnosed with VNOD and was given oral NSAID treatment with activity restriction for three weeks. No pain or limping was observed at 1, 6, and 12 months of follow-up. A written informed consent was obtained from the parents of the patients for the publication of this case report.

It is well known that asymptomatic radiographic abnormalities of IPS and its enlargement can be seen during normal childhood skeletal maturation.[1,2] However, when these radiological changes are accompanied by symptoms, it may be difficult to identify whether this is a pathological condition or a variation of the normal ossification pattern. The MRI is a helpful tool for differential diagnosis of VNOD.

Herneth et al.[5] reported that asymmetric enlargement in IPS was observed mostly on the non-dominant side and there might be a relationship between unilateral IPS enlargement and dominancy. They also indicated that this might be due to the fact that the swinging leg is the dominant side in some motor activities (jumping, kicking ball) and that the non-dominant leg remains on the ground, meets the ground reaction forces, and stays under mechanical stress. In addition, Duben[6] and Hubner[7] reported similar reasons that enlargement of IPS was caused by the callus tissue formed by the physiological response due to increased mechanical strain. Wait et al.[8] drew attention to the hypothesis that the cause of VNOD might be due to excessive pull of the hamstring tendons. However, in their retrospective study, there was no information about the dominancy of the patients. Chaudhari et al.[9] reported a right-sided VNOD of a left dominant, 12-year-old boy, and treated the patient with bed rest and NSAIDs. In some cases, VNOD may not respond to conservative treatment. In a case reported by Oliveira,[10] IPS curettage was performed in a patient who did not respond to six-week conservative treatment, and the patient's symptoms improved after surgery. In this case, VNOD was also diagnosed on the non-dominant limb and good results could be achieved with the conservative treatment.

The diagnosis of VNOD is challenging, as it can mimic other pathologies such as stress fractures, osteomyelitis, post-traumatic osteolysis, and bone tumors.[10] Stress fractures, which can be observed as irregular fracture lines on MRI, occur after prolonged exercise or radiotherapy.[2] Bone tumors are usually seen as lytic lesions with soft tissue involvement.[2] Post-traumatic osteolysis, which can be seen as an erosion or irregularity in the MRI images, occurs after trauma. Typical findings of ischiopubic osteomyelitis (IPOM) are fever, elevated ESR and CRP, positive blood culture, and abscess formation.[8] Wait et al.[8] compared the clinics, laboratory results, and imaging findings of VNOD with IPOM in their series. They reported that the ESR and CRP were significantly more elevated in IPOM patients than VNOD patients. However, one of their patients with VNOD had an elevated value of ESR and CRP. The ESR and CRP values were also slightly elevated in the laboratory findings of the first case. Laboratory findings can guide the differential diagnoses of VNOD and IPOM, but they should not be considered as concrete diagnostic factors. The MRI can provide significant information for the diagnosis. Van Neck-Odelberg disease has a typical area of focal bone marrow edema on MRI with free fluid collections, while abscess and presence of myositis suggest IPOM.

In conclusion, patients with VNOD present with non-specific groin pain and limping. Trauma, post-traumatic osteolysis, stress fracture, osteomyelitis, and neoplasms are other pathologies that should be considered in the differential diagnosis. Activity restriction and NSAIDs appear to be sufficient in treatment of this condition. Informing the family about this rare disease in detail can increase treatment success.