Ankylosing spondylitis (AS), which is a chronic inflammatory disease, is the most frequent and severe subtype of seronegative spondyloarthropathies. Although it typically affects the axial skeleton, the spine, peripheral joints, and entheses are frequently involved as well as extra-articular manifestations. In this case report, we present the clinical picture of malignant melanoma on the plantar surface of the foot, which is a rare side effect of anti-tumor necrosis factor therapy, as well as wrist arthritis, a very rare manifestation of AS. In addition, it dramatically illustrates how devastating AS can be for peripheral joints, while demonstrating the impact of arthroplasty and arthrodesis procedures on the patient's functional status.

Ankylosing spondylitis (AS) is a chronic inflammatory disease that is the most frequent and severe subtype of seronegative spondyloarthropathies.[1,2] It typically affects the axial joints, most notably the sacroiliac joints; however, other sites of involvement, including peripheral joints and extra-articular manifestations, are also observed.[3-5] Pharmacological management of AS includes disease-modifying anti-rheumatic drugs (DMARDs) such as anti-tumor necrosis factor (TNF) agents to control the disease progression. However, patients with AS may still present impairments accompanied by pain and decreased function and quality of life (QoL).[1-4] In some cases, the systematic effect of AS disease and adverse effects of DMARDs and anti-TNF agents may be catastrophic for the patient. In the current meta-analyses, anti-TNF drugs have been shown to increase the risk of melanoma and skin cancers.

In this report, we present a unique case of both drug-related malignant melanoma (MM), and wrist arthritis, a very rare peripheral joint involvement in an AS patient, which provides a contribution to the literature.

A 49-year-old Caucasian male patient was admitted to the outpatient clinic complaining of right wrist pain and movement limitation. His wrist pain existed for three months, and he had morning stiffness of about 30-min to 1-h on his right wrist. He had no history of hand trauma or congenital disorders in the past. His medical history revealed that the patient was diagnosed with AS 25 years ago, and his brothers were also diagnosed with AS. The patient was diagnosed with AS by meeting all the modified New York criteria with radiologically defined sacroiliitis, as well as symptoms and signs of decreased chest expansion, low back pain lasting longer than three months and not relieved by rest, and multi-planar limitation of lumbar spine movements. The patient had a right total hip replacement (THR) 23 years ago, and the right hip prosthesis was revised one year ago. The left THR applied 14 years ago and the right total knee replacement (TKR) 23 years ago. Besides, 23 years ago, bilateral pantalar and tarsometatarsal arthrodeses were performed with an interval of three months.

The DMARD treatment started, when the patient was 35 years old. Besides, treatment with 25 mg of etanercept was applied for 10 years, and adalimumab treatment (fully human recombinant immunoglobulin G1) was started in the following year and continued for one year. Following this treatment, a brown skin lesion appeared on the plantar side of his foot, and local excision was performed in this area. The pathology report confirmed a diagnosis of melanoma in situ (MIS). Anti-TNF-alpha (TNF-α) treatment was discontinued due to the thought that the lesion may be related to treatment. Later, extensive resection and skin grafting were performed on the same area (Figure 1). After this treatment, recurrence did not occur, and the patient and did not receive any medical treatment. 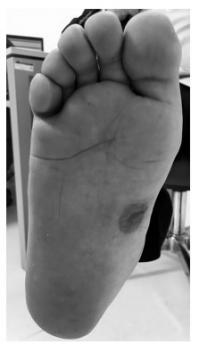 Figure 1. Local excision site in the plantar side of his foot.
× 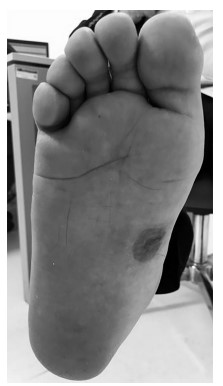 The laboratory findings were normal at the time of admission to the clinic. Besides, X-ray examinations at the time of admission to the clinic, the patient revealed ankylosis, squaring, and kyphoscoliosis in the vertebrae. There was Stage 3 arthrosis in the sacroiliac joint and arthritic changes in the right wrist (Figure 2). The THR was observed in both hips. Signs of loosening were observed in the right knee prosthesis. According to the Kellgren and Lawrence, Grade 4 arthritis was observed in the left knee, and there was pantalar and tarsometatarsal arthrodesis in the bilateral ankle (Figure 3). 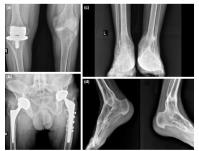 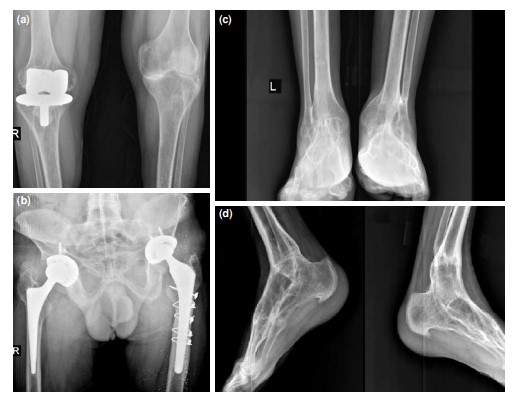 Patients with AS can present impairments accompanied by pain and a decrease in both function and QoL, such as axial involvement, tyoical skin manifestations, altered gait kinematics, higher risk of uveitis, and dactylitis, pulmonary function impairments, and decrease in exercise capacity.[1-5] It has been shown that peripheral arthritis observes in about a third of cases, with asymmetrical involvement of one large joint like the hip, knee, or shoulder.[2] Recent studies have demonstrated that symptomatic enthesopathy of the shoulder is common in patients with AS, and coxitis is the only predictive factor for shoulder enthesitis.[1,2] A study reported a 60-year-old AS patient with swan-neck deformity on both hands.[6] The radiograph of the hands showed no bone erosions, but magnetic resonance imaging of the hands showed enthesitis. Our case is an unusual presentation due to having the right and left THR, right TKR, and pantalar and tarsometatarsal arthrodesis on both sides. Our case was admitted to the outpatient clinic with a complaint of right wrist pain, and the range of motion of the right wrist significantly decreased without another involvement in the right upper extremity. There was few case reports on AS with wrist involvement in the literature.[3] Therefore, our case is a rare representation of the possible catastrophic effect of AS disease on peripheral joints.

The DMARDs such as anti-TNF agents may slow the progression of the disease of AS. However, they have a limited role in treating advanced established arthritis of the joints.[7] Due to the immunosuppressive properties of TNF-αantagonists, it is plausible that these biologics may increase the risk of the occurrence of malignancies or the reactivation of latent malignancies.[8] A recent study examining the potential association between TNF inhibitors treatment and MM in rheumatoid arthritis (RA) patients has shown that RA patients have an increased risk of melanoma compared to RA patients not treated with biological drugs.[9]

The safety profile of anti-TNF-α therapy is conflicting about major organ systems, serious infections, and malignancies. A systematic review and meta-analysis provided reassurance to physicians and patients that the treatment of RA patients with TNF inhibitor did not increase the risk of malignancy, particularly lymphoma.[10] However, it appeared to increase the risk of skin cancer, including melanoma. Our case is important, due to the documented diagnosis of MIS with the pathology report of a brown skin lesion on the plantar side of the foot after TNF inhibitor therapy. A large-scale meta-analysis and systematic review reported that anti-TNF therapy increased the risk of skin cancer, including melanoma, although it did not affect the overall risk of developing cancer in patients with inflammatory arthritis, including AS.[10] These findings may support the thought that the possible predisposing effect of TNF inhibitor treatment on increasing the risk of malignancies or the reactivation of latent malignancies in patients with AS. Therefore, the advantages of treatment with anti-TNF-α agents should be weighed against possible systematic disadvantages. It should be considered that the consequences of stopping anti-TNF treatment may be severe, particularly in cases where no other treatment is available.

In conclusion, it is possible to increase the health-related QoL with medical and surgical treatments in AS. Although there are major surgical interventions, orthopedic solutions are offered for peripheral joint involvement in eligible patients. Close monitoring of patients receiving anti-TNF therapy in terms of side effects is important. Studies with large case series are needed to investigate the short and long-term side effects of anti-TNF drugs in AS patients.