Fractures involving the fifth metatarsal are the most common foot injury after soft tissue traumas. We report a 30-year-old male patient diagnosed with a right foot Jones fracture after an inversion injury. The ankle was immobilized for four weeks with an ankle stabilization brace. Magnetic resonance imaging (MRI) was performed, and an impacted subchondral fracture line in the neck of the talus and severe bone marrow edema was observed, in addition to the Jones fracture. The immobilization period was extended, and bone marrow edema recovered after four months. However, chronic regional pain syndrome occurred as a complication. The patient received both medical therapy and physiotherapy for six months. At the end of one year, the patient fully recovered with no pain during full weight bearing and active range of motion of the ankle. In conclusion, MRI can be a valuable diagnostic tool to detect an unexpected talus fracture resulting from excessive inversion of the foot in plantar flexion, particularly in young patients.

As described by Lawrence and Botte,[4] fractures in the proximal end of the fifth metatarsal can be classified into three groups according to the influence of the anatomical structure of the peroneus brevis muscle and the peroneus tertius muscle, which are attached to the proximal and distal parts of the fifth metatarsal, respectively, and the mechanism of the trauma. Although Jones type 2 fractures, a transverse fracture at the metaphyseal-diaphyseal junction, are easy to recognize, delayed union or malunion has been most commonly reported in this type of fracture in the literature.[5] Although talonavicular dislocations concurrent with a Jones fracture have been reported in the literature, to the best of our knowledge, Jones fracture accompanied with talar fracture is the first to be reported.[5,6] According to Ottawa foot rules, conventional radiographs are adequate in patients with tenderness and swelling at the fifth metatarsal, and additional imaging techniques such as magnetic resonance imaging (MRI) or computed tomography (CT) are not necessary.[7]

Concurrent tarsal bone fractures other than navicular fracture are not common in orthopedic practice, and thus, MRI or CT is not considered necessary for diagnosis and follow-up of Jones fractures except those that are due to stress fractures.[8] Herein, we present a patient diagnosed with a fifth metatarsal fracture accompanying a Jones fracture.

A 30-year-old male patient, working as a specialist physician, was admitted to the emergency department after a plantar flexion-inversion injury due to a fall above 40 cm in height and was considered as a simple trauma. Physical examination revealed severe pain, tenderness, and swelling on the proximal part of the right fifth metatarsal. The initia l diagnosis was Jones fracture and was confirmed with conventional radiography revealing a fracture at the metaphyseal-diaphyseal junction of the fifth metatarsal (Figure 1). A short leg splint was applied in the early stage, followed by a four-week immobilization with an angle adjustable ankle stabilization brace in a fixed flexion angle of 90°. 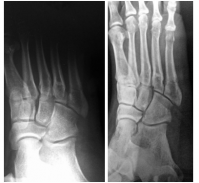 Figure 1. Early fracture line at the proximal end of the fifth metatarsal on oblique radiographs.
× 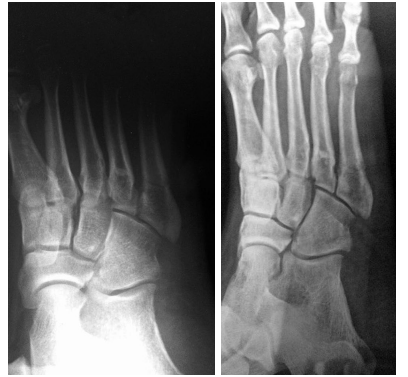 At the end of four weeks, MRI was performed due to severe pain, which occurred after partial weight bearing. In addition to Jones fracture, severe bone marrow edema, an impacted subchondral fracture line, and cortical discontinuity at the neck of the talus were observed (Figure 2). Cortical and medullary irregularity at the base of the fourth metatarsal was also noted in MRI, with no accompanying clinical findings (Figure 3). Upon closer reinspection, this finding was identified on the initial radiograph as well (Figure 1). Thus, the immobilization period was extended with clinical and radiographic follow-up in addition to non-steroidal anti-inflammatory drug treatment. The initially localized bone marrow edema at the talar neck region recovered four months post-injury, and the patient was able to bear weight without pain, whereas chronic regional pain syndrome occurred as a complication with splotchy marrow edema throughout the bones of the foot and distal tibia, as seen on radiographs (Figure 4a-c). As a form of chronic regional pain syndrome, clinical manifestations of reflex sympathetic dystrophy syndrome (RSDS) were apparent with swelling, pain, burning sensation, and typical skin changes in the affected extremity. Reflex sympathetic dystrophy syndrome was treated with transcutaneous electrical nerve stimulation, progressive weight bearing, massage, contrast bath therapy, and topical analgesics. Although the patient fully recovered from the concomitant Talar neck fracture at the end of four months, the patient fully recovered from RDS, both clinically and radiologically, only after one year, despite the aggressive treatment initiated as soon as the diagnosis was made (Figure 5). A written informed consent was obtained from the patient for the publication of this case report.

Figure 2. Impacted subchondral fracture line and cortical discontinuity at the neck of talus on (a) T1 -and (b) T2-weighted magnetic resonance images.
× 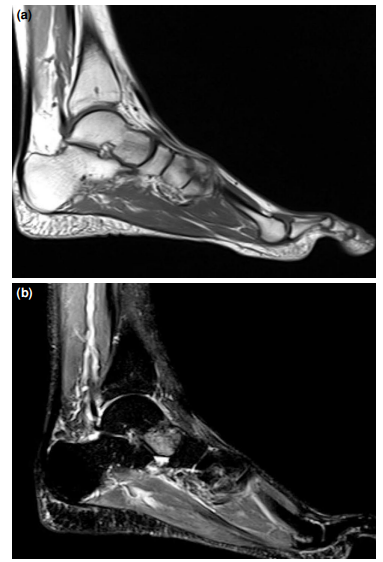 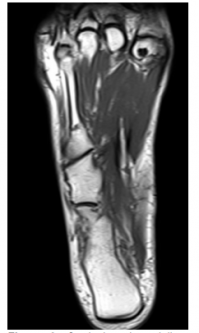 Figure 3. Cortical and medullary irregularity at the base of the fourth metatarsal on a T1-weighted magnetic resonance image.
× 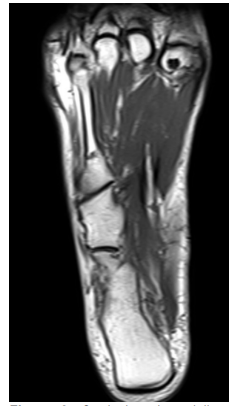 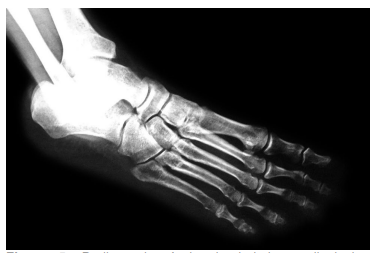 Conventional radiography is reported to be sufficient for the diagnosis and follow-up of Jones fractures, excluding stress fractures.[3,8,9] Magnetic resonance imaging or CT is generally not required in these cases.

Although a rare case of talonavicular dislocation concurrent with Jones fracture has been reported, talus fracture as a result of the Jones fracture mechanism has not been discussed in the literature up to date.[6] In our case, it was speculated that the talus fracture occurred due to the initial contact with the ground following the 40 cm fall, and afterward, the flexion-inversion mechanism led to the Jones fracture. Post-injury four-week MRI images, revealing localized bone marrow edema accompanied by an impacted fracture line and cortical discontinuity at the neck of the talus, were the distinctive findings for a talar neck fracture. However, the generalized, more splotchy-like bone marrow edema appearance observed in the follow-up images as a consequence of RSDS has to be distinguished from concomitant fracture edema with its previously mentioned typical radiographic and clinical findings. Appropriate medical and physical therapy should be initiated as soon as the RSDS diagnosis is made since its clinical manifestations can extend several years.[9] The cortical and medullary irregularity of the fourth metatarsal bone detected in only some images, attributing to a possible fracture diagnosis, was not supported by clinical findings and became indistinctive at the early follow-up radiographs.

In conclusion, although Jones fractures are considered a simple fracture and are almost always diagnosed with conventional radiographs, in young patients, concomitant talus fracture resulting from a plantar flexion-inversion injury should be kept in mind, particularly in patients whose complaints have extended over the natural healing course and the inability to bear weight is observed at the end of six weeks since the treatment modality varies and the risk of RSDS tends to be higher in this fracture type. Magnetic resonance imaging can be a valuable diagnostic tool for detecting talus fractures in these patients.