Prosthetic joint infection (PJI) is a devastating complication of arthroplasty. Prosthetic joint infection commonly needs a two-staged revision procedure with high complication rates. If the causative microorganism is Acinetobacter baumannii (A. baumannii), treatment is even more complicated. The treatment of PJI with multidrug-resistant gram-negative bacteria without implant removal is a rare occurrence. Herein, we report a 46-year-male that presented to our clinic due to right groin pain. After evaluations, we decided to perform total hip arthroplasty. Following an uneventful surgery, the patient was discharged home as routine practice. However, PJI with A. baumannii emerged within two weeks. We implemented debridement, irrigation, antibiotics, and implant retention (DAIR) since infection markers were low and the presentation was not severe. Success was achieved at the end of four weeks. The patient is functional and has no complaints at the time of writing this study. In conclusion, DAIR can be suitable for PJI with A. baumannii, and if PJI is diagnosed early, it can provide favorable results in a more accessible fashion.

Treatment of infection can be more challenging when causing microorganisms are multidrug-resistant bacteria. One of these is Acinetobacter baumannii (A. baumannii), a ubiquitous, encapsulated, aerobic, non-motile gram-negative bacteria that causes severe infection among hospitalized patients.[3] It has been gaining resistance against various antibiotics by three mechanisms: deferent β-lactamases, efflux pumps and membrane permeability, and changing the sequence of penicillin-binding proteins.[4] Producing biofilm on the abiotic surfaces is another essential virulence factor, particularly for infections following implant placements, which concerns orthopedic surgeons.[5] Current treatment options include potent antibiotics such as colistin, tigecycline, and meropenem, which are widely accepted as a last resort.[2] This report presents a patient who underwent total hip arthroplasty and subsequently acquired a PJI with A. baumannii within two weeks and was treated with debridement, irrigation, antibiotics, and implant retention (DAIR) successfully.

A 46-year-old male patient presented to our outpatient clinic due to right groin pain in January 2020. The patient also expressed difficulty in moving the right hip and limping. The patient’s medical history was unremarkable besides the right groin pain, which had persisted for approximately 10 years. The patient stated he had never smoked, used alcohol, or illicit drugs. The patient’s only medication was ibuprofen, which provided little relief for hip pain. Family history was also noncontributory. Clinical hip examination showed the right lower extremity was 2 cm shorter than the left side. The patient had significantly lower internal and external rotation angles comparing those on the left side. The flexion angle was about 90°, and there was also 10° of flexion contracture. Plain radiographs revealed advanced stage avascular necrosis of the femoral head (Figure 1). The patient’s body mass index was 28.5. After discussing the surgery indications, benefits, and disadvantages with the patient, a total hip replacement was planned. The patient was ready for operation the following month. The contemplating and other necessary measurements that guide appropriate implant and its size were also addressed. 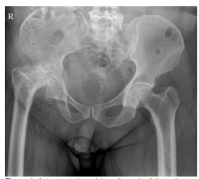 Figure 1. Anteroposterior pelvis radiograph of the patient at first presentation.
× 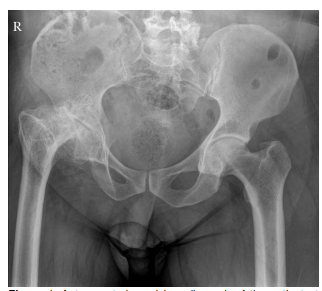 The patient was administered 1 gr cefazoline as a prophylactic antibiotic, and routine infection precautions such as prepping and draping. Surgery was performed with the anterolateral approach. Since the patient was relatively young and had an active lifestyle, we preferred using ceramic bearing surfaces for acetabular and femoral sides. The patient was hemodynamically stable soon after the operation, and therefore, was not admitted to the ICU. After the patient achieved mobilization without support, they were discharged home on the fifth day after the surgery with low molecule weight heparin subcutaneous injection substrates, cefuroxime, and oral nonsteroidal anti-inflammatory drugs.

A small amount of serous fluid oozed from the incision in the first week of discharge, and upon first follow-up, the patient was rehospitalized. We changed the wound dressing daily and started intravenous (IV) cefazoline and gentamicin after taking wound cultures on the first day of readmission. The cultures produced multidrug-resistant (except colistin) A. baumannii on the fifth day of incubation. All studied biochemistry panels and the complete blood count (CBC) were in the normal range besides C-reactive protein (CRP), which was 17.71 mg/L (reference: 0-5 mg/L) on the 10th day (Figure 2). The patient was operated on at the end of the second week. We performed only surgical debridement and irrigation as the femoral and acetabular components were well fixed, and both mobile surfaces were preferentially ceramic. Deeper tissue samples and blood cultures were retaken simultaneously.

While culture results were pending, IV teicoplanin was administered. The cultures taken during the operation produced the same pathogen on the fifth day of incubation. Colistin and meropenem treatments were started by strictly following renal functions and adequate hydration. Subsequently, on the 15th day of treatment, serum creatinine and urea levels increased rapidly. The colistin treatment was paused despite high infection parameters and continuous surgical site discharge. After renal function tests returned to the basal level, a new treatment regimen was tailored by infection disease specialists, adding rifampicin to the current meropenem treatment with appropriate dose adjustment to the renal clearance rate. The following four weeks were uneventful. The CRP levels declined from 120 mg/L to below 10 mg/L gradually (Figure 2). Except for the interim negligible wound discharge, the patient was stable. At the end of four weeks of IV antibiotic treatment, there were no issues in the wound and no pain around the surgical site. The patient mobilized independently. All biochemistry panels and CBC were within an acceptable range. We terminated the antibiotic treatment after discussing with infectious disease specialists, discharged the patient home, and planned regular follow-up visits.

It has been 23 months since the index surgery, and the patient is non-compliant and functional currently. Last X-rays did not show any sign of infection, such as the loosening of the prosthesis (Figure 3). The patient was informed that data from the case would be submitted for publication and gave their consent. 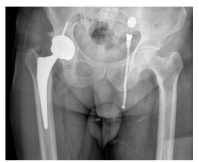 Figure 3. Anteroposterior pelvis radiograph of the patient at the last follow-up visit.
× 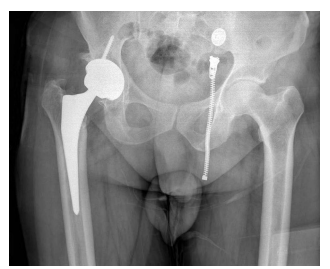 Prosthetic joint infection caused by Acinetobacter species is relatively rare.[6,7] The treatment of these bacteria is becoming more and more challenging over time due to the accumulation of resistance against the most potent antibiotics. It is worrisome, particularly among orthopedic surgeons, and results are not promising if A. baumanii is in the picture. Current management of PJI is a two-stage revision with severe complications that includes bone stock loss, perioperative fractures, blood loss, need for ICU, prolonged treatment period, and expensive implants.[2] However, as similar reinfection rates after one-and two-stage procedures were reported recently, two-stage procedures may be unnecessary in particular cases.[1,2]

There is limited data to support DAIR in PJI with A. baumannii. Two reviews have mentioned that it is possible to achieve success if the diagnosis is confirmed within four weeks and the causative agent is low virulent as biofilm production has not been established yet.[6,7] It took two weeks to diagnose the PJI in our case. Since the CRP levels were 17.71 mg/L, and the fluid discharge from the wound was not abundant, single-stage debridement, implant retention, and IV antibiotic administration were good options. Although Kazimoglu et al.[8] reported a lower success rate for the DAIR procedure in treating patients with early-onset PJI, they concluded that disease onset within two weeks of implantation with a sedimentation value lower than 60 mm/h provides more favorable outcomes. Additionally, Martínez-Pastor et al.[9] supported this conclusion in another publishing, finding a positive correlation between patient outcomes and CRP levels below 15 mg/L at diagnosis.

Recently, a study presenting three cases of PJI with A. baumannii was published by Vila et al.[10] They successfully treated the patients with implant retention, repeated debridements, and exceptionally high doses of tigecycline. In our case, the pathogen was resistant to tigecycline as well. Our case differs from this study since we used standard doses of colistin and meropenem, sensitive to causative bacteria. Despite having kidney failure during the IV therapy, after appropriate accommodations, kidney functions improved, and the treatment strategy succeeded.

The main limitation of this study is the lack of joint aspiration cultures during the first evaluation. Although A. baumannii may be colonized the skin flora of hospitalized patients and may result in misdiagnosis of PJI, intraoperative cultures also revealed A. baumannii, supporting the diagnosis of A. baumannii PJI.

In conclusion, DAIR can be suitable for PJI with A. baumannii. If the diagnosis of PJI is established within four weeks of primary surgery, it can provide more bone stock and relatively intact structure than one-and two-staged revision techniques for later procedures in active young patients. It is also an easy technique and has a lower complication rate.