A large vessel injury after the insertion of a pedicle screw is a rare complication, and sudden bleeding or pseudoaneurysms may occur. We present a 19-year-old male patient with a diagnosis of adult idiopathic scoliosis who underwent surgery without intraoperative complications. When the patient developed dyspnea on the postoperative second day, an anteroposterior X-ray revealed lateralized screws on the left side at the segments T3 through T8, which was confirmed by computed tomography (CT). During this process, the patient had also developed hemothorax, and the patient was stabilized by the drainage performed by thoracic surgeons. The patient underwent revision surgery on the 10th postoperative day. Subsequently, the patient did not have any complaints during three years of follow-up. In conclusion, considering that the unexpected localization of pedicle screws after scoliosis surgery may have serious consequences, a CT scan should be performed in case of any doubt, and revision surgery should be performed urgently in case dangerously located pedicle screws are detected.

The pedicle is the structure that connects the anterior column with the middle and posterior column. Because the pedicle screw passes through the vertebral pedicle and extends to the anterior column, it is a solid stabilization technique that covers all three columns and a method that has a wide range of use from spinal deformity to degenerative spine and tumors.[1] Since the screw also passes through the inner column, the surrounding structures are at risk. The most important of these structures is the spinal cord. The thoracic region, particularly the azygos vein, intercostal artery, inferior vena cava, and aorta, and the iliac arteries in the lumbar region are at risk. Vascular injuries are a rare but substantial complication of spinal surgery.[2]

Vascular injury can occur in the form of sudden death due to sudden bleeding, as well as a pseudoaneurysm that causes symptoms in the postoperative period, or these patients can be detected randomly on a computed tomography (CT) scan taken a few years later without having any symptoms. There is not much information on this topic in the literature. Herein, we present a case with an unexpected localization of the pedicle screw nearby the aorta after scoliosis surgery and the management of this complication.

A 19-year-old male patient presented to Gülhane Training and Research Hospital, Department of Orthopedics and Traumatology with a complaint of thorcalumbar spinal deformity. The patient was diagnosed with adult idiopathic scoliosis by standing anteroposterior spinal radiograph, and the patient was operated on. The patient did not experience any issues on the first postoperative day, and an anteroposterior X-ray of the spine showed lateralized screws at the left T3 through T8 vertebral segments (Figure 1). The patient developed shortness of breath on the second postoperative day, and a CT scan was requested, which confirmed that the screws were lateralized and revealed that the patient had already developed left hemothorax. The patient was urgently evaluated by thoracic surgeons, and the possibility of a ruptured esophagus or segmental artery bleeding was considered. The patient underwent esophagography, and no leakage was observed in the esophagus (Figure 2). Afterward, the patient’s hematoma was surgically drained, and the patient stabilized after this procedure. The patient was mobilized on the second day after the drainage.

Figure 1. Anteroposterior radiograph of the spine showing lateralized screws at the left T3 through T8 segments.
× 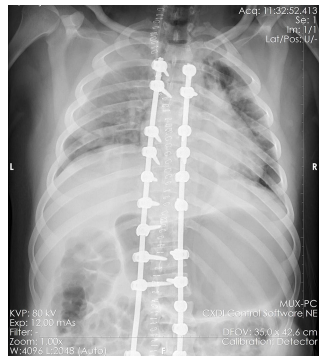 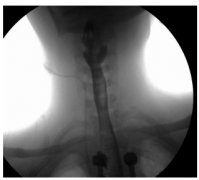 Figure 2. Esophagography demonstrating the absence of leakage in the esophagus.
×

Since the left T4 screw was found to be in contact with the aorta on CT scan (Figure 3), although the patient's condition was stable, revision surgery was decided due to the risks of pseudoaneurysm or perforation that may develop in the future. A consultation with cardiovascular surgeons was held. The procedure was performed in the cardiovascular operating room in the lateral position to place distance between the aorta and the vertebrae. The aortic graft was prepared by the cardiovascular surgery department before the operation. During the surgery, the lateralized screws were removed first. Since the position was not suitable for screw placement, a laminar hook was preferred instead of screw revision (Figure 4). The patient, whose general condition was well, was mobilized on the first postoperative day. The patient did not develop any complications during hospitalization and was discharged. Thus far, there have been no complications with the patient, who is in their third postoperative year. A written informed consent was obtained from the patient for the publication of this case report.

Figure 3. Computed tomography image displaying the contact of the left T4 screw with the aorta.
×

Figure 4. Radiographs demonstrating the laminar hook used instead of revision screws after the removal of the lateralized screws.
×

The stenosis of the thoracic pedicles and the presence of deformity in scoliosis indicate a higher rate of misplacement of the thoracic pedicle screws.[3] In patients with major scoliosis, the aorta is extremely close to the vertebra.[4] In these patients, it is seen that the aorta is situated more laterally, which increases the possibility of injuring the aorta when pedicle screws are placed laterally.[5] This condition may present with sudden vascular bleeding and may require sudden vascular intervention, or it may be asymptomatic.[6]

Since the aorta is a pulsatile structure that moves continuously, a screw in contact with it indicates constant trauma to the aorta. Since it has been reported that pseudoaneurysm may develop due to these traumas, we decided to revise the screws in our patient in the early period.[7] When approaching these cases, there are publications recommending aortic graft placement to minimize the possibility of bleeding before the screw is removed, and a 3.9% risk of paraplegia has been reported in these cases.[6,8] In the current case, we preferred to remove the screw without using a graft, in close contact with the cardiovascular surgery team, and accompanied by the graft prepared by measuring the preoperative CT images of the patient. Since the patient was hemodynamically stable after the screw was removed, no graft was needed for the vascular structure.[8] A recent publication indicated that in the lateral decubitus position, the aorta is located farther from the vertebral column.[9] In a recent report on two cases, successful removal of malpositioned pedicle screws was performed in two patients with aortic lesions without using vascular grafts.[10]

In the presented case, we operated on the patient in the lateral decubitus position instead of the prone position. Therefore, we considered it appropriate to use a laminar hook instead of using revision screws after removal of the lateralized screws.

In conclusion, thoracic aortic injuries due to incorrect pedicle screw placement are a rare but substantial complication. In any case of doubt regarding the screw, CT scans should be viewed immediately. In such cases, revision without grafting may be considered, although post-graft screw revision is generally recommended in the treatment.